Relationships in your 1st year

Common wisdom in A.A. says don’t make any major changes your first year.  Practically in the same breath, though, we hear: “Come to a meeting every day and don’t drink between meetings. Find a Sponsor and tell him those things you swore you would take to the grave. Don’t Lie, Cheat or Steal. Get a job… And find God!”

If those aren’t some major changes, I don’t know what are.  Apparently the only thing I’m not allowed to do is get laid.  They say “Don’t get into a relationship”, but they tell you to get a Sponsor and call him every day and tell him your life story, and he’ll  tell you his — which sounds kinda like a relationship to me — so I guess the only thing off the table isn’t getting close to someone, but actually having sex.

I actually heard a girl say that — and try to justify it — in a meeting.

“If you meet somebody you really like, just spend a year getting to know her.  Go on dates and talk… but don’t have sex! It could change your life!”

There are 3 parts to sex: 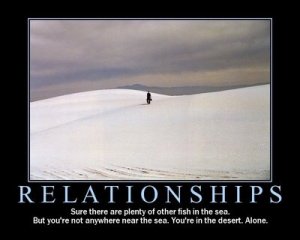 That’s it.  It would be nice to elevate it to some higher plane, put it right up there with Love, but that’s not what it is or where it belongs.

Besides, I’ve never heard anyone say: “Stay away from Love your first year”. But Love can drive you bat-shit crazy.

Bubba put it best: “This is Alcoholics Anonymous.  Ain’t no woman ever got me drunk.  Alcohol’s the only thing ever done that!”

A certain Roofer’s sponsor said: “Get into every relationship you can! You’ll learn from every one of them.”

The Roofer added: “And get ’em while they’re still shakin’! It’s less work!”

To which Hector added: “Yeah! ‘Cause if you wait ’till they work the Steps they’ll be too healthy for YOU!” 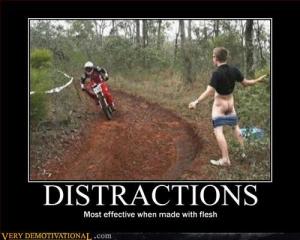 Some reasons for the common “wisdom” are that it will distract you from your sobriety.  You’ve just gotten a brand new hobby — going to A.A. meetings — to replace drinking.  How many hobbies do you want to start at once?  At some point you’ll be faced with a choice of going out to dinner with your new “lower power” or working on your 4th step.  You’ll be torn between meeting with your sponsor and meeting with “her”. Simple Time Management principals say we can’t do it all.

A large number of people with long-term sobriety — one of the better benchmarks of effectiveness — make A.A. their life the first few years of sobriety.  You hear old timers talk about packing up a caravan of 3 cars and a dozen people and going up the coast for the weekend to find new meetings, activities like that.  I was at a speaker’s meeting downtown 5 years ago and a “Sponsor’s tree” — a group of 10 guys — from Sarasota showed up.  The meeting gave them the floor and each one just spoke for 5 minutes.  What it was like, what happened, and what it’s like now.  A moving, uplifting and exciting meeting.  For one night, they got to be not just another guy at their homegroup, but part of a dynamic group of guys on a mission to spread the word of recovery and have a great time.  5 or 10 memories like that in your back pocket and I’ll bet you’d feel pretty damn good about yourself and your recovery.  What did dinner and a movie with Her get you?

Other people go out to dinner in large groups.  These day’s it’s Starbucks, but it used to be just some restaurant.  Back in the early 80’s there was a chain in Tampa called WAGS where sober drunks hung out after meetings.  My friend Steve was 5 years sober before he realized it didn’t really stand for “Where Alcoholics Get Sober”.  But you see, HIS whole world was about A.A., so he never questioned that THE whole world was about getting sober.

On Friday nights at 9:30 you’ll see a pack of hot young women invade 3 Coins restaurant on Nebraska.  A word of advice: they’re not there to meet YOU.  Leave ’em alone. 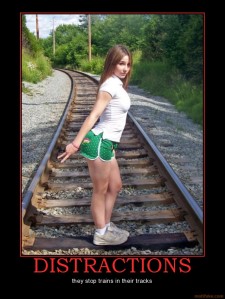 Another reason for staying out of “Loving Relationships” the first year is that in some sense it can derail the program’s effectiveness.  If you were to break A.A.’s program from 12 steps down to 2, it could be described as 1) complete deflation of ego, followed by 2) a spiritual experience.  Alcoholism leaves you teetering on the brink of insanity. You begin to question whether drinking — and every subsequent decision you have made in the last few years — wasn’t pretty stupid (“insane”). Now you’re ripe to receive a new message.  Steps 1 through 5 show you the folly of your ways (ego deflation). 6 through 10 show you how to be a different person (rebuild new ego). Steps 10 and 11 keep you on the path long enough to have your spiritual experience (though I prefer Jung’s term, “Psychic Change”). 12 merely keeps it green.

Psychologically, it’s quite sound.  It’s what the armed forces use to make a team. Rehabs use the same technique to get people off the path they’re on and onto a new one.  The prison system uses it to make the prisoners docile.  Break the ego down completely, and then rebuild it any way you want, depending on your purpose.  In short: brainwashing.

That word sounds bad.  The truth is, my brain needed washing.  Still does.  I am in a state of constant vigilance looking for untrue messages that I send myself. On any given day I believe dozens of things that are simply not true.  I’ll walk into a meeting, glance around the room, and tell myself a half-dozen lies: “That girl likes me.  I could have sex with her if I wanted to.  That guy over there hates me.  But that’s OK, I could kick his ass” (Here’s a note on my ass-kicking: I’ve probably been in 50 fights and I think I’m 1 and 49.  Most of you are pretty safe from me. But if my little sister starts any more shit, I’ll put her down just like I did when she was eight!)  My ego and my fear are where all of my false messages come from.

With this in mind, “Ego Deflation” cannot occur if there is someone in your life who is telling you how great you are.  It’s true that you’re smart and funny and good-looking and great in bed…  All those things she tells you are true.  So fucking what.  You didn’t come into A.A. because your life is so fucking great.  Part of a Loving relationship is that you look for only the good in each other.  That’s great, and serves it’s purpose, but nothing is improved by looking at the parts of it that work well.  That’s not the shit that needs fixing.  I spent 25 years as a computer programmer.  My clients tell me that if I write a system that has 25,000 lines of great code, and one line that causes it to blow up, then “the whole thing doesn’t work at all”.  I don’t fix the problem by marvelling at how well I did on 24,999 lines.  I fix it by looking for the one that needs improving. 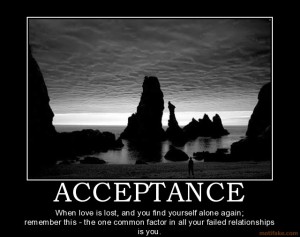 And finally, the best reason to not get into a relationship your first year is that it won’t be a “healthy” relationship.  Both people have to be healthy for the relationship to be so, and frankly, your first year, you’re not.  It would be nice to think: “She’ll provide strength in the areas where I’m weak…” but you can’t make a good relationship out of a bunch of fucked up parts.  I’m pretty sure the key is to be a whole and complete (healthy) person,  find another whole and complete person, and try to bring happiness to them.  If they have the same goal, it’ll probably work.

And of course if you are both alcoholics early in recovery, the chances of one of you causing the other to relapse is greatly increased.  When they want to get drunk, your desire to please them, combined with your own desire to drink — however small — will take you back out.

So when I really look at it, the concept of “stay out of relationships your first year” is sound, but I don’t like it when YOU say it.  Because you’re stupid, and only repeating what you’ve heard others say.  Plus, you didn’t even do it yourself, which makes you a hypocrite.  The truth is, it’s safer to walk through a minefield with a map of the dangers than down a city street without one.  The accurate way to say it is: “It’s OK to get into relationships your first year, but be aware of the pitfalls.”

And remember, this is a “WEEeee” program.

4 Responses to Relationships in your 1st year