“I should…” always has a “but…” in it.  Even if I don’t act on the “but” — and do exactly the right thing — there will be a niggling little feeling that I could have done something more fun, more rewarding.  It’s my inner child, testing the limits.  It’s my mortality, raging against the dying of the light.  It’s my alpha-male type-A personality playing king-of-the-hill like a testosterone laden billy-goat. One more balls-out experience. I’ll act responsibly next time.

I understand how to get the max points in a video game, and know that if I don’t stay in the confines of the rule structure, I don’t make it to the next level.

The difference between the former examples and the latter are that I think of the latter as “Rules“.  The former are just “Good Ideas“, or “Really nice ways to act“.  There are negative consequences for breaking Rules, but not for failing to be “Super Nice”.  The big book tells me ‘Half measures availed us nothing.”  I always thought that was pretty rude.  I oughta get some credit for doing half the job! Shit! If I’m just “Pretty nice” and not “Real Nice”, If I don’t act on a “Bad” idea — just don’t act on the “Best” one — I should get partial credit!

But what if some of the things I blow off as unimportant turn out to be the “meat“.  One rule I use in life is “Nothing succeeds like Success“.  If it solves the equation, it’s probably the right answer.

My friend Nurse Dru told a story in a meeting 10 years ago that has stuck in my mind ever since.  I believe it was written by Leo Buscaglia.  I’m going to mess it up pretty good — I’m getting it 2nd hand — but if you like it you can look it up.

There’s a Heaven/Hell mixer.  For one day they meet each other.  A guy from Heaven asks a guy from Hell: “So, what’s it like down there?”.

“Oh! You wouldn’t believe how bad it is! For instance, they put is at a Looooong table, Full of every type of food you like. But the silverware is 4 feet long! You get a fork-full of your favorite food, and you can never get it to your lips! It’s torture!”

The guy from Heaven say’s “Wow! That does sound bad. Heaven’s a LOT different!  We’ve got the same table, full of the same foods.  Our silverware’s 4 feet long, too.  But we just feed the person across from us.  And they feed us.  We spend an eternity getting just what we want and being thankful for it!”

What if it was true. What if Happiness came from doing for others, not doing for myself.  It would answer a lot of questions.  Foremost is: “Why do the things that feel so good, make me feel so bad?”  Getting drunk, blowing dope, having sex with women I don’t know or care about… These are the things that — while I’m doing them — feel the BEST! Later, I feel like crap about them.  2 hours of Joy and 20 years of Sadness.  Really?  Is that the deal I made?  Is that what I considered “the BEST!”?  I may not be getting the best return-on-investment there is.  I may want to re-think it.

I couple of years ago I got to a meeting, late, and the topic was “Service work”.  10… 15 minutes later Martin shared: “As I was coming to the meeting tonight, I saw one of our brethren doing a good deed.  Helping a blind man off the bus and across the street.  I remembered that several years ago, this man was flying high — had a brand new car — and wouldn’t have been riding a bus.  He used to have a huge house on the water, now he sleeps in the weeds.  I can’t help but think that maybe everything that has befallen him was for the purpose of bringing him to that exact point: Where he was in a position to help THAT man, at THAT time.  … I would like to say — in his defense — that he didn’t look too happy about doing it, though!”

The back story is: The blind guy wanted to get off the bus, and I thought: “How the hell is he gonna know where he is?” So I asked him what I could do to help.

He said: “Just get me to the bus-bench. I can get home from there.”

I can do that, it’s only 8 steps from the bus. But that’s an insurmountable distance if you can’t see.  So I get him to the bench.  I turn to go.  “… and the Thus-and-Such motel is right there, right?”, pointing.

“Oh, No! I’m going North! I thought I was going South! I need to be on the other side of the street!” 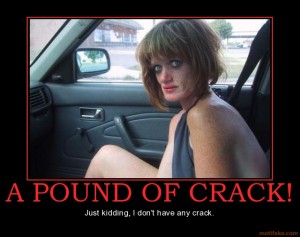 Man, we’re on Sligh and Nebraska.  Ain’t nobody around but crack whores and crack dealers.  As much as I respect them, I can’t see a “Daughter of the Night” helping him get across the street.  It’s up to me.  I don’t know what to do, though.  My backpack is still on the bus.  My wallet, money, cell phone… even my bus pass are in it.  Everything I own.  I broke my own cardinal rule of being homeless: “Never let go of your backpack.  Not for a second!”

I’ll do it fast! That’s the answer!  It’ll take me 2 seconds, longer and the bus will leave without me.  … Rush hour. Cars flying. Fuck that! Hold my hand out for them to stop.  Walk out before they do.  I walk into the street with the blind man holding my arm.  A sighted man wouldn’t have followed with traffic bearing down like that.  Tires screeching. “Are we OK?”

“Yeah, fine.” They’re stopping for us. Glancing back.  Repeatedly. Bus still waiting. If it was leaving, would I abandon him? Don’t know. Thinking. Save myself. Save him.  Get him to the bus bench.  “Can you make it from here?”

Don’t hear the rest of what he’s saying. Dashing across the street. Don’t have a blind man with me.  People don’t want to stop. I don’t care.  Run right in front of them, tires screeching, flipping them off.  Look like Ratso Rizzo: “Hey! Fuck You! I’m Walkin’ here!  I’m Walkin’ here!” Get to the bus.  Get on.  Backpack still there.  I’m OK.

I was full of fear.  I don’t have Faith.  There’s nothing inside of me that tells me I’m going to be OK. On the contrary, my inner messages tell me that if I don’t watch out for myself, I’m gonna get screwed.  Isn’t that what all fear is: thinking that I’m not going to get what I want or will lose something I have?  I am FULL of fear.

Because I don’t help others.  One more paradox.  All I want is to be happy — so I grab for it with BOTH hands — and it slips through my fingers.

What if the way to happiness is to do for others?  If it’s true, 99% of the people reading this — who are full of Faith — are pitying me right now.  They’ve known this all along.  It’s obvious to them.

That one deed put one drop of water into a glass. It improves my self-esteem .01%.  That’s all.  I don’t feel like a great guy — hell, I was tricked into doing it — but I did one good thing. Do you people with Faith walk around with your glass nearly full — the way I want mine — because you help others?  Will those tiny drops make a difference?

On page 77 the Big Book say’s: “Our real purpose is to fit ourselves to be of maximum service to God and the people about us.”  I thought that was just icing on the cake.  But maybe if I don’t help others, there’s no fucking cake to ice.

Maybe that’s a Rule, not just a suggestion.

I am a man with no Faith.  I am no different from that blind guy.  I stumble around because I don’t understand the Rules.  I get results I don’t like, and assume it’s because God hates me.  Maybe it’s because I’m breaking the rules.

I write this because my “growing up in public” may benefit someone someday.  As I said, 99% of you probably know everything I just said.  It’s Spiritual Kindergarten for you.  Well, it’s not for you.  It’s for that 1% that are as lost as I am.  If all I have to do to help that one person is look stupid and show how spiritually immature I am, It’s worth it.

Lord knows, there’s room in my glass for a second drop.

This entry was posted in Big Book, Spirituality. Bookmark the permalink.

2 Responses to Our real purpose