This is a thought that has bounced around my head for about 5 years now.  I have hesitated committing it to paper (pixels) because it is heresy.  Heresy is defined as: “a controversial or novel change to a system of beliefs, especially a religion, that conflicts with established dogma”.  Truth is, my “system of beliefs” didn’t work so damn well for me.  I need to ferret out the un-truths by holding everything to the light.

When I was in 4th grade there was a half-day the next day.  Got out at noon.  I lamented to my best friend: “I hate half-days!”.  He was astounded.  “Why?!? We get out of school early!”  I started to tell him it was because on half-days my mother made me take a nap when I got home, but then I realized that hadn’t been true since kindergarten.  Hell, my mother worked now and wouldn’t even BE home when I got there!

I had a set of beliefs, but the foundation to support it was not there, or was no longer applicable.  In A.A. they call this realization a “Psychic Change” (secular) or “Spiritual Awakening” (non-secular), which I’m pretty sure both mean the same as “Heresy”, but the H-word has a bad rap. The spin-doctors are alive and well.

So, as I look at all the places I’ve been lied to — by myself or the world — I’ve come up with some interesting things.  At the top of the list is: “The Golden Rule”.  This was always held up as the highest standard one could hold himself to; to do unto others as you would have them do unto you.  As I examine it, though, I realize it is the biggest load of self-centered crap ever foisted on mankind.

Yeah, we got right to Heresy, didn’t we?

I’m not trying to be funny, or cute, or shocking… I am being as serious as I can be.  I am in a life and death struggle — my very soul hangs in the balance — and I can’t let yesterdays truths, told to me by someone else, hold me back.  I must look at everything.  Say what you will, I don’t think God wants me to blindly accept some words written on a piece of paper.

I have done translation in my time, from one language to another. I know you can lose meaning in subtleties, nuances, colloquialisms, provincialism, and idiom. Truth be told, I only understand about 80% of what my younger co-workers are saying.  And they’re speaking english.  I think.

The Big Book of Alcoholics Anonymous ends with the sentences: “We shall be with you in the Fellowship of the Spirit, and you will surely meet some of us as you trudge the Road of Happy Destiny. May God bless you and keep you — until then.”  I first read that and thought: “I don’t want to ‘trudge’ anywhere! I want to ‘skip’!” I hear: ‘trudge’, I think: ‘drudge’ – Hard, menial, or dull. But it really means: “to walk with purpose”, which is a good thing,

Let’s be honest.  If I can’t get the full meaning out of a sentence written 75 years ago in english, what chance do I have of fully comprehending something written 2,000 to 4,000 years ago in Aramaic, Hebrew, Sanskrit…

While I’m damning my soul to eternal flames for blasphemy, another phrase — the commonly accepted meaning with which I disagree — 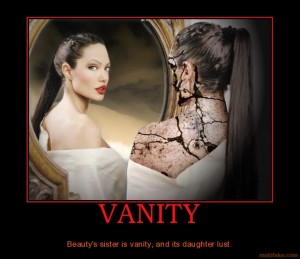 is the third commandment: “You shall not take the name of the Lord your God in vain, for the Lord will not hold him guiltless who takes His name in vain.”.  I think God might be a little bigger than that.  If my older sister — who is now 52 — emailed me and called me a “doo-doo head”, it wouldn’t be quite as devastating as it was 47 years ago.  What has changed is my level of maturity, patience, tolerance and understanding. My concept of self-worth is strong, so words of condemnation are met with a mixture of amusement and pity.  I’m willing to bet my soul that God’s self-image is pretty intact. He probably doesn’t have little sayings taped to the dashboard of His car like: “Don’t let ’em getcha down!”, and spends practically NO time looking in the mirror saying: “You’re WORTH IT, Yahweh, no matter what people say!”

When I’m pissed off and say GD — or Jesus Christ! — I truly believe my God chuckles, shakes his head, and says to himself: “That little bastard sure is having a bad day! Hey, JT!  I’ve given you all the answers, son, when are you going to get it?”

What “vain” means is “worthless,” or “empty”.  “Vanity” means “The quality or state of being vain; want of substance to satisfy desire; emptiness; unsubstantialness; unrealness”  In a word: Worldly.

We all know there are televangelists who are in it for the money, and those who feel it in their soul.  I think what God might have been saying is: “Don’t use MY NAME to put a Mercedes in your garage!”  I can see why he’d be pissed about that.  Jesus and the Pharisees.  Where it gets tricky is always in “motive”.  Come Judgement Day — if asked if they did it for personal gain — even the best of them will probably have to admit: “You know, I started out doing it for you, Lord, and 90% of the time that was what was on my mind… But yeah. there were times I wasn’t feeling it, tours I went on just for the exposure, and gigs I took because they paid well.”.  If we derive any worldly gain from our religion, we are on a slippery slope.

Flip the coin.  I have a friend who visits the Prisons to provide comfort.*  “Good Christians” have looked down on her for spending time with drug addicts, thieves and prostitutes (much like Jesus did).  The 3 places I have been told to watch my motives involve Sex, Security and Social Standing (Status).  If I am in fear, or lying, cheating or stealing, it is because one of these is out of balance. But what if you are giving up these things? What if by going into the prison you have to A) walk into a room with men who haven’t seen a woman in years, B) don’t get paid for going there (in fact, use your own gas to get there) and C) people in your community and church look down on you for doing it? If you suffer in all three areas, it’s pretty obvious you’re not doing it for personal gain. Ever. Not even once.

So, back to the Golden Rule: “Do unto others as you would have them do unto you”. Sounds good, but let’s throw some situations at it and see how it holds up.

I haven’t seen George for a while.  He walks up to me, punches me on the arm and say’s: “How ya doin’, ya ugly old cocksucker!“. The first thought that goes through my mind is: “George likes me. He wants to be my friend!”  I am perfectly comfortable around that kind of talk and rough action.  Matter of fact, at my Father’s funeral my boyhood best friend — who was very close to my Dad — snuck up behind me, twisted my arm behind my back, and pinned me to the wall.  I thought it was a fine greeting after 20 years. Picked up right where we left off; couple a billy-goats.

5 minutes later I see my old 3rd grade teacher.  I snuck up behind her, put the old bag in a headlock….. No.  I did Not! Why? Because I knew THAT WAS NOT THE WAY SHE WANTED TO BE TREATED. Duh! She didn’t want me to punch her on the arm, get physical with her in any way, call her a name… And all it took was a half of a second to put her feelings into the equation.

The Golden Rule — as written — does not require that I take any other person’s feelings into account.  I do not have to put one iota of thought into what would make anyone happy but me.  I think we’ve just found a working definition of “selfishness“.

Maybe to be truly Golden, the rule should read: “Do unto others as they would have you do“.

There are people who think I am dead wrong about this, and that the Golden Rule is fine as written.  Funny thing, most of them also believe I shouldn’t use the word “cocksucker” in an essay talking about God.  And you know what? They’re probably right. But you can’t have it both ways. If I feel comfortable with rough language, and I use it around you (treat you like I want to be treated) then I should be held up for praise if the Golden Rule is correct.

Why am I not applauded? Because the basis of civilization is to limit one’s behaviours to the lowest common denominator.  My son wants to walk around naked all the time.  Bobby wants to stay drunk 24-7.  Jerry wants to have sex with every woman he sees.  But we tell them this isn’t right.  Society tells us that people have a right to not see naked, drunken people having sex.  The basis of socialization is adherence to a rule set that make the most people feel comfortable, and limits the fewest number of people.

This entry was posted in Spirituality, Unfounded Personal Opinions. Bookmark the permalink.