Posted on September 8, 2010 by AsJimSeesIt

Mark Twain — one of our Brethren — once said: “Truth is the most valuable thing we have.  Use it sparingly.”

Nothing in my essays should be relied upon.  I am a known raconteur, and I will stretch the truth for both humor and to appear smarter.  Is it possible to be honest about being untruthful?

They say Alcoholics Anonymous is an “Honest program”.  The word is used 3 times in the first 2 paragraphs of “How it Works”. 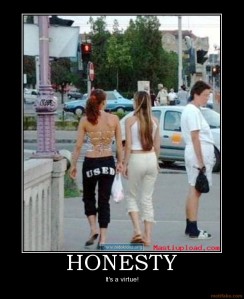 “Those who do not recover are people who cannot or will not completely give themselves to this simple program, usually men and women who are constitutionally incapable of being honest with themselves.”

“They are naturally incapable of grasping and developing a manner of living which demands rigorous honesty.”

“There are those, too, who suffer from grave emotional and mental disorders, but many of them do recover if they have the capacity to be honest.”

What, if any, is the difference between “Honesty” and “Truth”?  Jesus often spoke in parables, so much of what He said wasn’t true, in the strictest sense.  Yet by telling a story with exaggerated characters and outcomes, he was able to expose MORE truth… the Honest Truth.

10 years ago, on a Friday night, a woman showed up at Sobrenity in a whirlwind of Drama.  There was a Woman’s meeting on the back porch, so she was directed there.  She’d just arrived in town moments before, having travelled 1,200 miles in a piece-of-shit car.  Her clothes didn’t fit — or even match — and she was bald from Chemo.  She was crying and “in a state” as they would have said in 1939.  She claimed to have been sober for 20 years, but she was such a wreck no one really believed it.

She said she’d just left an abusive relationship, and that her name was Genna Lee.  She was retired from the military as a Lt. Colonel and had a Doctorate in Psychology.  In time we all called her “Doc”.

She stayed with a woman in the program until she got on her feet.  She cleaned up real nice.  She got a job, and a nice car, and her hair grew out. She sponsored the woman she lived with, and several others.  A few years later she was the Assistant Chairperson of our group, a position that I find is more powerful than Chairperson.  She handled it well.  She became the level head that the group needed.  She chaired meetings and did service work. She was the Rock that we could all depend upon, what the 12×12 refers to as an “Elder Statesman”.

A year or so later, she disappeared.  Just as quickly as she came.  Kind of like Mary Poppins.  One of the ladies she sponsored did a little Internet Sleuthing, and found her address and phone number, right there in the town she said she was from, as though she’d never left.  So she called her, and THIS Genna Lee was 86 years old.  No, she’d never been to Tampa, she said, but Yes, she was in Alcoholics Anonymous, she’d been sober for the last 25 years, by the grace of God.  She was indeed a Doctor of psychology.  Then realization struck: “Oh, my dear, she’s done it again!  That’s my daughter!  She used MY name and MY background… Don’t believe a THING that girl tells you! She’s been a liar her whole life.  Can’t stay sober a lick.”

Nothing that she’d said about herself was honest.  We’d known her for the better part of 5 years and nothing we knew about her was real.  Not her name or her sobriety or her education.  But she carried a message that was true.  Her pigeons (sponsees) are all still sober, because they believed what she told them: That you never have to drink again no matter what happens.  She brought the group Unity like it hadn’t had in a decade.  And she was sober the whole time she was here.

I’m glad I knew her.  I feel as though I am a better man for having known “Genna Lee”.

So please don’t ask me to comment on the value of truth and honesty.  Especially not in a program that tells you to “Fake it until you Make it”.

I write this because I had a compliment on my blog the other day.  Compliments make people with low self-esteem uncomfortable, as they are excruciatingly aware of their shortcomings. It’s something I need to work on, but the first thought that went through my head was: “I’m not that smart or good! I’m a screw-up with little Spirituality and crappy Sobriety! If I accept this compliment, someday I’m gonna be on Oprah explaining some of my dumb choices over the years.  She’ll say; ‘You call that recovery!’ and people will throw rocks at me and call me names and I’ll cry…”

The truth is: I’m a pretty good writer, I write what I see, and I see some pretty good things.  That’s all.  I hope no one confuses the message with the messenger.  I’m just another one of God’s chillun’ tryin’ to get by as best he can.

And Oprah ain’t blowin’ up my phone anyway!

4 Responses to An Honest Program